I was recently accepted into a London pre-accelerator, called Hustlehack. It runs over three weekends taking placing in Imperial College London with various workshops, talks and mentor periods for idea stage candidates.

With a strong interest in the comment space, I decided to use this opportunity to explore this market and problems within this domain. Me and my partner began by defining commenting:

Commenting is a form of expression that elicits response.

It comes in many forms (verbal, audio, visual), occurs in many places (on-site, off-site, online and offline) and are motivated by many reasons (enjoyment, information, reputation).

We then did some customer development, by interviewing potential users. We had a sample size of around fifty. The general trend among the population is that they don't comment. There's a negative perception of it and often commenting means undergoing some sort of risk - risk of having backlash or leaving a 'digital trail' for example.

We prioritised an actionable pain that we could help alleviate. This was the inability to know where discussions were happening beyond one's own sources. For example, a breaking news story would create a wave of reports across the web, with conversations dispersing. It becomes very hard to keep track of different opinions. We noticed some current fixes that users apply: searching for a relevant phrase on social media, search engines and content websites like youtube. Definitely not optimal, but this action implies an important need.

Youtube has made many of it's content creators very rich. A significant part of their success comes down to the user interaction, through views, shares, likes and comments.

The most subscribed YouTuber of all time, PewDiePie recently removed comments from all his videos. He made a video with his reasons (probably not worth watching, putting it here for reference).

To some, this is a great deal, to many this perhaps has no effect. Either way, it's hard to ignore his 32.1 million subscribers, 6.72 billion views and estimated $10 million net worth. All from commentating over gameplay.

The core issue to him, was that the comment section was of low quality. It was filled with abuse, spam, offensive language and whatever else you could imagine.

He raises a valid point, YouTube comments are horrendous and it has infamous reputation for being bad. Google's attempt at revamping them was also an utter failure.

I put this down to various reasons. I'll discuss the most salient - moderation tools. To think that there is one moderator for millions of views, and thousands of comments is scary. That makes cleaning up inappropriate comments at virtually impossible task. The most effective tool is perhaps the global ban on words or phrases. But that is still limited, and bit old-fashioned. Isn't there a solution?

Give moderators more tools! And perhaps YouTube should allow content producers to add additional moderators! I'm sure there are members of PewDiePie's user base that are dedicated enough to sweeping up the comments. Platforms like reddit allow multiple moderators for its communities, and a greater array of tools for moderators, resulting in a much positive ecosystem. Other platforms need to as well.


Email ThisBlogThis!Share to TwitterShare to FacebookShare to Pinterest
No comments:

Obama: FCC should reclassify internet as a utility

Just a short one for you all. Today was a great milestone as Obama declares his mission to instigate Net Neutrality once and for all. Finally! If you don't quite know what that is and if it's important or not, well watch this short CPG Grey video  (in short, it's stupidly important).

But what I really want to draw attention to was the comments I found paired with this content. 3200 comments on reddit, 500 comments on the Verge, and I'm sure there's more elsewhere. Drool.

For me this is what the internet should be like; experience the content and then join the discussion! It's sad that it takes such a big announcement to create conversation.

If you would like to read the comments (I highly suggest you do) the links are here:


Oh and if you didn't know, Obama actually did an AMA (ask me anything) over at reddit, with a mind blowing 24,000 comments. Making it one of the highest rated things of all time on reddit. He did a great job as well. He's doing things right when it comes to embracing the future. Giving a community the ability to vote on content is important, especially on comment platforms. It's funny to think that some platforms still list comments chronologically.

Upvotes are a simple way to convey support, and it does a great job at pushing the good things to the top.

Even our political system is based on this idea. Since the days of ancient greece, polling for our desired representative has been the dominant way of organising society.

Although this ensures fairness, oftentimes politics is also just a big popularity contest.

What's more, irrelevant content will remain, and spam will not be removed.

Sometimes you have to be negative to be positive.

Downvotes help curtail the spam, the troublemakers and the trolls. If you feel like you don't notice the bad side of comments, thank the community and the downvote (moderators play a large part as well, but we'll save that for another post).

Also thank the downvote for erasing the comments that go against the general consensus - that's the community using the downvote as an expression of disagreement.

So the next time you upvote or downvote, make sure you're asking whether the comment contributes, not whether you agree or disagree.

Shout out to Ben Morran for unpacking my writers block!

Thoughts on the current commenting landscape

I find myself in the position where after watching an amazing video or reading an interesting article, I'm still curious. What's the reaction? What is the community saying? What are experts saying?

But to my discontent, I’ll find that there’s no discussion to follow.

Which is strange. It's innately human discuss and debate. Yet it feels so uncomfortable and unnatural on the web.

I’m not the only with this problem. Many others have it too.

I'm sure you can relate. You browse some content and you have a relevant comment but something stops you:
I call these problems barriers to commenting. We need to reduce these barriers as much as we can!

The Verge loses the marginal user.

Comments are an impulse thing, you experience something and want to react.

I think it's really important to reduce the friction between the moment someone wants to comment and the action of doing so.

I had a not so great experience recently while reading the verge online.

After reading the article and then comments section, I wanted to pass my own comment.

I don't normally sign up for additional online accounts but I thought I'd try it out. So the registration process was pretty simple: username/ password/ email.

But after logging in, I was told that I couldn't comment, because they need to verify my account and this would happen in a days time.

I'm patient user and frequent commenter, so the additional wait is fine for someone like me.

But to really popularise commenting platforms, you need to make it as easy as possible for the marginal user, for them to experience the magic moment, and for them to contribute.

But what about all those impatient users that leave at a moments notice. The verge created an unnecessary barrier to commenting that would deter many potential users. The worst thing is that they are unmeasurable!

If you're interested in the marginal user, watch Lecture 6 of the 'how to start a startup' series. Alex Schulz from Facebook highlights the importance they put on the marginal user rather than just the power user.


Email ThisBlogThis!Share to TwitterShare to FacebookShare to Pinterest
No comments: 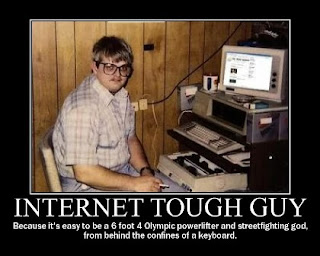 Quadrupling the sentence to combat cyber-bullying?! My instinct tells me that this isn't right . It's an old school approach to a new school problem.

"No-one would permit such venom in person, so there should be no place for it on social media"

Calling someone a shit in real-life and a shit over an internet connection do not have the same gravity. He implies that that they do.

He assumes that the internet is only an extension of real life, when in reality it is a parallel world.

For the wants and needs that we cannot fulfill in our day to day lives, we turn to the internet to get our fix, to give our opinions and to contribute. Most importantly, we do it in privacy.

That is exactly why the internet is a great place.

And surprise, surprise, BBC still has no commenting section.